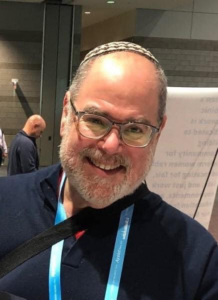 Marc Kline retired his law license to go to Rabbinical school. Now, over 30 years later, he serves as Interim Rabbi at Temple Ohev Sholom in Harrisburg, PA. Over his career, Marc has served in 3 previous communities and been active in Justice and Interfaith work locally, regionally, and globally. He feels blessed to bring his experience to our community, committing to continuing his growth and ours over the years we will spend together.

Marc’s primary focus as Rabbi roots in a several thousand-year-old precept found in Pirke Avot (amongst the earliest of Rabbinic writings): “If I am not for myself, who will be for me? If I am only for myself, what good am I? If not now, when?” As he sees it, community building is Torah’s primary goal. Our work in faith must take care of everyone, not just those in our circle. He works to bridge the chasms that alienate people from each other. In that role, he has served on many local, regional, and national boards, and plans to continue such service as a way to pay forward the many blessings he has experienced.  He is excited to share the work that he has done and will continue to do as he assumes his interim rabbinic role at Temple Ohev Sholom.

Rabbi Marc’s justice work spans a lifetime. He helped end the male / female separation in Kiwanis Youth in high school and co-planned and led the 2000 march on Columbia, SC, to remove the Confederate flag from atop the Statehouse. He is active in peace and pluralism work across the United States and Israel/Palestine. Promoting gender and sex equality, Interfaith cooperation and communication and working with communities on all sorts of social justice issues have been pillars of his rabbinic work.

Rabbi Marc has been widowed (the late Cindy Kline) and remarried. His wife, Lori Bernard, and he claim seven children, three children-in-law, and two grandsons between them.

He and Lori are looking forward to getting to know the Temple Ohev Sholom family.